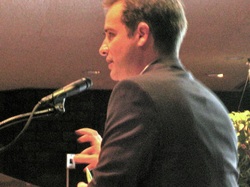 Invited Speaker. “‘Germany is in Kurdistan’: Internationalism and the Implicated Subject,” Scales of Memory, Australian National University, December 10, 2014. (via Skype)

Invited Speaker. “‘Germany is in Kurdistan’: Internationalism and the Implicated Subject,” Memory Without Borders, University of California, Berkeley, November 14, 2014.

"What Does It Mean to Inherit the Past? Holocaust Memory Through the Migrant Lens." James Hoffmann Memorial Lecture. Dartmouth College. February 25, 2013. Read about it here!

Keynote Speaker. “What Does It Mean to Inherit the Past? Migrant Archives of Holocaust Remembrance.” Memory and Countermemory: For an Open Future. Arizona State University, November 8, 2012.

Invited Speaker. “Working Through the Past, Turkish/German Style.” With Yasemin Yildiz. After the Violence: Memory. University of Wisconsin, Madison, September 21, 2012.

Invited Speaker.  “What Does Coming to Terms with the Past Mean (in an Immigration Society)? Turkish/German Vergangenheitsbewältigung.” With Yasemin Yildiz. Goethe-Universität Frankfurt am Main, June 13, 2012.

Keynote Speaker. "'Grandpa Was No Nazi': Migration, Generation, and Memory in Contemporary Germany." Conflict in Memory: Interperonsal and Intergenerational Remembering of War, Conflict and Transitions. Aarhus University, May 9-11, 2012.

Invited Speaker. "Migrant Archives: Coming to Terms With the Past in Contemporary Germany." With Yasemin Yildiz. Centre for Literature and Trauma, University of Ghent, March 28, 2012. 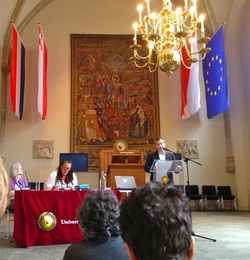 Keynote Speaker. "Under the Sign of Suitcases: Testimony and the Politics of Mediation." The Future of Testimony, University of Salford, UK, August 11-12, 2011. 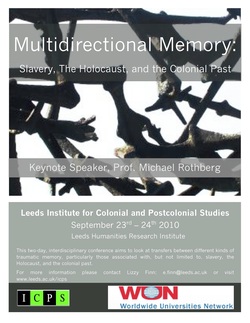 Keynote Speaker. “The Terrorism of Memory: The Multidirectional Legacies of October 17, 1961.” Trauma and Memory: Perspectives on Algeria and the Holocaust, University of Newcastle, UK, May 6, 2009.

Invited Speaker. “’Doesn’t that Remind You of Something?’: Caché, the Papon Trial, and Multidirectional Holocaust Memory.” Institute for Jewish Studies, University of Antwerp, April 23, 2009.

Invited Speaker. “Toward a Translational University.” “The Politics and Culture of the Humanities.” IPRH/Institute for the Humanities, University of Illinois, Chicago. March 9, 2007.

Keynote Speaker. “Of Literature and Terror: Before and After September 11.” MUSE Conference, Illinois-Wesleyan, September 30, 2006.

Invited lecture. “The Representation of the Holocaust in Literature.” Department of Religious Studies. College of William and Mary, April 15, 2004.

Invited lecture. “The Work of Testimony in the Age of Decolonization.” University of Illinois, Chicago, March 12, 2004.

Invited lecture. “Between the Post-Holocaust and the Postcolonial.” University of Virginia, February 15, 2002.

Invited speaker. “Othello in Auschwitz? Blacks, Jews, and the Forms of Identification.” “Tales and Taboo: Controversial Narratives of the Holocaust and Nazism.” Cornell University, April 13, 2001.

Invited lecture. “On the Interdisciplinarity of the Extreme: Traumatic Realism and the Nazi Genocide.” Institute for German Cultural Studies, Cornell University. 13 November 1998.

Invited lecture. "The Year of the Holocaust." Harvard University Department of English, January 18, 1995.